A journey with Hannu Rajaniemi’s second novel The Fractal Prince feels like surfing the boundary of incomprehensible quantum physics while sitting in the desert, warm dust blowing across the sparkling sky, the face of a djinn hovering before your eyes, a voice in your head – as the landscape and the people you meet reshape themselves, constructs and chimeras all, a world populated with post-human species simultaneously fascinating and unknowable.

Fractal requires substantial concentration of the reader, tolerance of ambiguity, love of language, and visual imagination. As Niall Alexander noted in a Tor review, the novel is “minimalist” – there are few  explanations of the science, technology, relationships, history, or characters. (Gary Wolfe says in Locus, “hardly any sentence consists only of words you already know.”) To make any sense of it, you will want to frequently check the online list of characters and the glossary of terms.

We are in a far-future, post-singularity setting, with multiple species of trans-humans living everywhere from the Oort Cloud at the edge of the solar system to good old Earth. Strictly speaking The Fractal Prince takes up immediately after The Quantum Thief, with the protagonist Jean le Flambeur undertaking a mission for his post-human patron, Josephine Pellegrini, who periodically takes over the body of Mieli, a moderately post-human Oortian. The Quantum Thief opens with Mieli rescuing Jean from a Dilemma Prison, and here the two of them continue in their journey on the sentient ship Perhonen that Mieli crafted by singing songs.

Fractal begins in a Paris café where we meet Matjek Chen, who is later revealed to be the Prime, the first post-human of the sobornost species, the most godlike of the godlike. Soon appears Tawaddud Gomelez, who is making love with a jinn in a bottle, as the story becomes Arabian Nights.

Confused? Don’t forget to bookmark that list of characters.

A mystical, magico-technical, post-human set of interlocked stories ensues. Fractal perhaps, or quantumly entangled, with characters appearing and disappearing like Schrodinger cats, snuffed out only to return again. The flavor of sentences remain in the air, like incense in your tent, calling forth images and experience: “Q-dot tendrils like sparks from a Tesla coil trail from my fingers into the little box of lacquered wood floating in the middle of my cabin. Behind it, displayed on one gently curving wall, is the Highway – a constantly flowing river of spaceships and thoughtwisps, a starry brushstroke in the dark.”

Some references are so opaque that they tax your understanding through most of the book, such as The Dark Man, dragons, the box, the kaminari jewel, the Great Common Task, the Jannah of the Cannon. Yet their very mystery torques the sensibility, leaving you uncertain of what or who is real – an appropriate state of mind in a post-spike existence when anything is seemingly possible. The transhuman foglets congeal, forming a face in the air…

Since it was published in 2005 I’ve considered Accelerando to be the pre-eminent singularity novel, the best fictional description of a time when information and technological acceleration takes off, leaving humanity 1.0 behind. For all its virtues though, Stross’ earlier novel differs from The Fractal Prince in two important ways. For one, Stross has a knowingly gonzo winking tone, whereas Rajaniemi wants to immerse you in a traditional detective story. More importantly, Accelerando takes the reader through the transition, and Fractal is set hundreds of years after the spike. 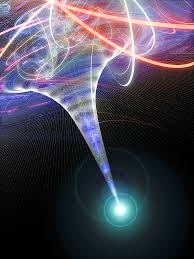 Rajaniemi certainly has the background to tackle a hard science novel, having earned a PhD in mathematical physics from Edinburgh, and founded a company, ThinkTank Maths, that crafts scenarios in quantum games, bovine bliss, and nanomedicine. For all its far-flung speculation and references to jinn and dragons, Fractal cleaves to his hard-science roots; while throwing the net into the future to see what fish it might catch, the net is nevertheless woven from known equations, strangelets and superstrings. Fractal pulls us into pre-technological desert nomadic life, when creatures were called into existence through magical words, when each tribe sat around a fire telling stories late into the night. In this impossibly quantum future, where you can form a quantum dot bubble to float in the boiling atmosphere of Venus, or step through a Realmgate to be translated into a vir(tual reality), everything hinges upon the telling of stories, stories hanging like pearls on a thread, as the Gita would say. Secret names function as techno-mantras, calling forth nanomachines to transform the very air; post-humans extract boons in the form of a true story (more valued than “mere” fiction).

Perhaps Rajaniemi honed his love of the spoken word as a member of Writers Bloc, to which Charles Stross also belongs. In the end, it is the poetry of Fractal that lifts the novel from the common run. Many SF novels will have a smattering of breath-taking concepts which make you gasp with wonder. Fractal often has a dozen per page, wrapped in sentences that beg to be read out loud. “Vectors rain upon her like the scrawls of an angry child.” And echoes of literature that are all too easy to pass by unseen, as when Jean is wrestling with a tiger in a constructed reality, and losing. “Don’t throw me into the thorn bush,” he thinks, and if we are attentive we hear Brer Rabbit, and the echo of the trickster Jean himself, and even the gentleman thief and detective Arsene Lupin, the French Sherlock Holmes, upon whom the trilogy is based. Echoes and mirrors.

So by all means give Fractal a try, and contemplate the future of humanity, quantum strangeness, and the fractal mirror of consciousness.

This entry was posted in Fiction, Singularity. Bookmark the permalink.

One Response to The Fractal Prince